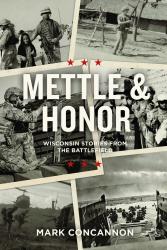 Mark Concannon is a four-time Emmy-award-winning storyteller. He’s connected with audiences through video his entire career – previously as a decorated journalist. He grew up in Philadelphia doing sportscasting, and came to Milwaukee in 1987 to join the sports crew here – the original Fox 6 wakeup news, for 20 years. He was always there to provide positive, cheerful news, so it was an easy transition to start his own business cheerleading for other businesses.

In my continuing Milwaukee series I chatted with him about news, what it has sort of turned into, being positive, his journey in media, his own media company he currently heads, his new book, veterans and some of the gems of Milwaukee.

His new book, Mettle & Honor: Wisconsin Stories from the Battlefield, he provides eyewitness accounts from those who were there; at Normandy, Iwo Jima, Inchon, Khe Sanh, Kabul, and Fallujah. In Mettle & Honor, Wisconsin veterans, as interviewed by Emmy Award-winning journalist Mark Concannon, tell their stories.